Robots Are Brought To Life 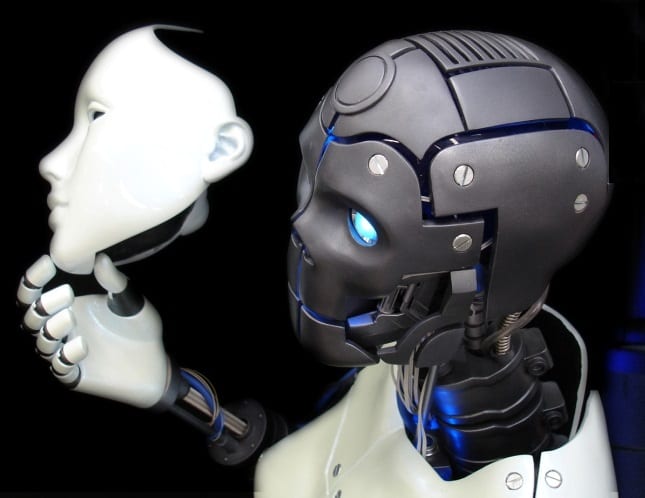 This exciting exhibition, which is open until April, offers visitors the chance to get up close and personal with life-size replicas and real movie props of their favourite sci-fi characters, such as; C3PO & R2D2, Robocop and The Locutus of Borg from StarTrek. Visitors can also marvel at (No pun intended) a spectacular, full size Iron Man figure, which was originally used to promote the blockbuster movie.

Robot also features a nostalgic array of TV bots including; Kryten from Red Dwarf, Marvin the Martian, B9 from Lost in Space and a Sontaran from Dr Who.

Less known, yet equally impressive, exhibits are also on show. These include; the gargantuan Japanese Mech, The Robot Sculpture with its endoskeleton constructed from cogs, bearings, springs etc and the adorable Robot RH34 which is a one of a kind, hand built robot designed for Macy’s world famous NYC department store.

There’s also an impressive collection of robot toys on show, which chronicle the evolution of these popular childhood favourites – from 1950’s clockwork robots to today’s sophisticated fusion of toy and technology.

Nearly every robot on display, has its own QR code giving visitors the opportunity to scan the code with their phone and access videos and info about each exhibit. There’s also a really useful, downloadable pdf guide that’s packed with info on each character.

There’s more to come…Amy Patterson – Centre for Life’s Communications Assistant and huge sci-fi fan told us: “During February half term, our visitors will be offered some exciting bonus features and a chance to meet some special guests. We will have Daleks in the Centre, as well as experts from York Robotics Lab who will be bringing humanoid robots. We will even have a robot orchestra!”

In Today’s modern era, Robot technology is making significant advances and becoming increasingly prevalent in our lives – They build our cars, clean our houses and even perform intricate life saving operations. The rapidly decreasing gap between robot fiction and robot reality begs us to ask the question…Are we really ready for them? ( Cue -The Terminator theme Music).

Robot will be at Life until April 17. Access to the exhibition is included in the admission price to the centre.

Read More »
December 15, 2021
PrevHave you read?Newcastle Then And Now In Pictures
Next read...10 Facts About Chinese New Year 2016Next