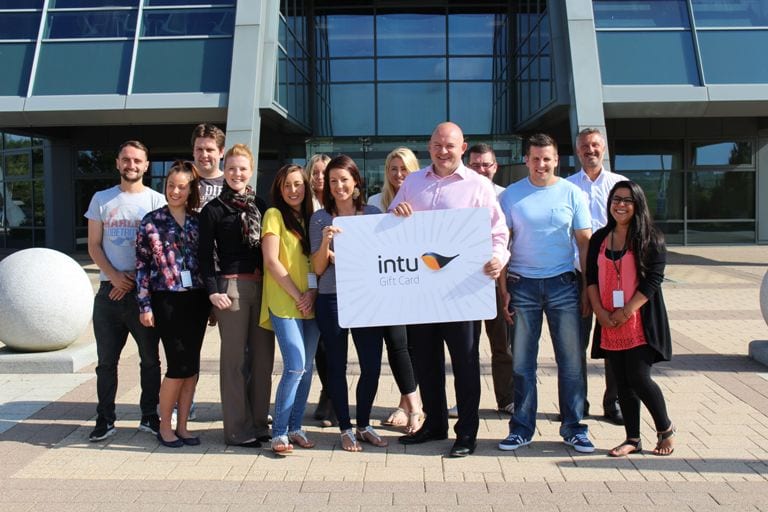 intu Metrocentre and intu Eldon Square have been on the hunt for the North East’s most social business and today crowned Gosforth-based business software company Sage as the overall winner.

The competition, which asked North East based businesses to demonstrate their influence on Twitter, saw a range of local companies taking part from Northumbrian Water and Primula Cheese to Northumberland’s Whitehouse Farm and Credence Brewing.

To enter, businesses were asked to tweet an image from their company channel and try to gain as many retweets as possible within a four week period.

intu Metrocentre and intu Eldon Square presented the award to Sage’s EVP and managing director Lee Perkins at its offices in Newcastle along with £200 worth of intu Gift Cards for their staff.

Lee said: “Sage is delighted to be crowned the North East’s most social business. We have innovation and entrepreneurial spirit at the heart of our business and this opportunity caught the imagination and energies of our colleagues who were happy to support us.”

Following the success of the first few weeks of the competition intu Metrocentre and intu Eldon Square wanted to reward the ultimate winner but also recognise a runner up.

Zapatista Burrito Bar, a Mexican restaurant and take away in the centre of Newcastle, came a close second by drumming up some incredible support from its followers. They were rewarded with a £100 intu Gift Card from intu Metrocentre and intu Eldon Square in recognition of their efforts.

Regional marketing manager Karen Carr said: “We’re all busy people and we wanted to inject some fun into the region’s local businesses whilst also highlighting the increasing importance of having an influential social media presence.

“As our gift cards are already used by hundreds of companies across the North East as corporate gifts to reward staff, we thought they would make the perfect prize for the winner and runner up. The huge benefit of our gift cards is that you can spend them at both intu Metrocentre and intu Eldon Square at over 400 stores, restaurants and leisure facilities.

“Our gift cards can be used for almost every occasion; especially if you want to be a Super Boss, what better way to reward your hardworking staff.”

Geordie Inventions: Seven things you might not know were thought up right here in Newcastle

Easter in Newcastle: Ten ways to keep the kids happy over the school holiday