Witch hunts, a journey into the bowels of the castle, and Vincent Price: I Love Newcastle reviews a special screening of Witchfinder General, co-hosted by Newcastle Castle and Screenage Kicks. 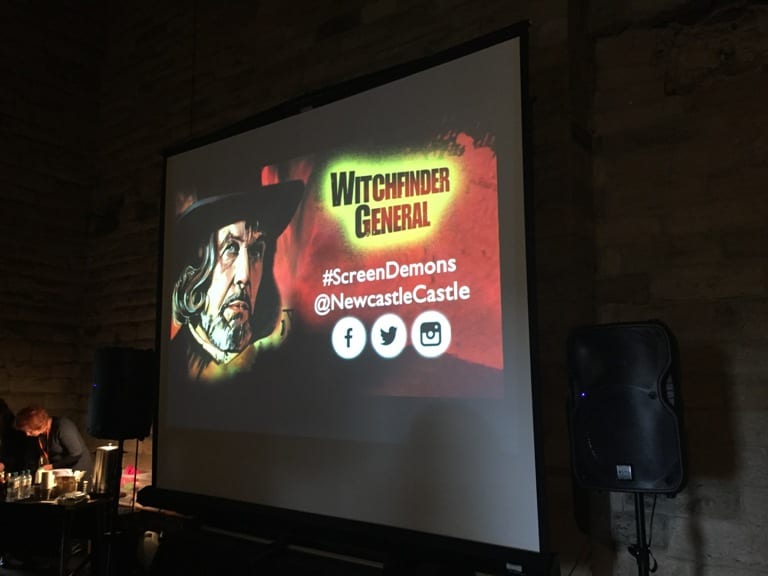 After my previous visit to Newcastle Castle for their Bela Lugosi night in March, I was excited to hear about their screening of Witchfinder General (Reeves, 1968). The night was part of the Screen Demons Film Festival, hosted by Screenage Kicks and offering the chance to view classic horror films across Newcastle.

Combining folklore, film and history, it included a mock witch hunt, a screening of the film, a tour of the castle basement, and a panel discussion with experts.

Climbing the stairs to the Castle Keep, we were among the first to arrive, yet were not alone. Women dressed in modest garments flanked the stairwell, speaking in hushed tones of witchcraft and brutal punishments. Witnessing live actors in this historic location transported the castle steps back in time and added to the fun.

Once everyone was seated in the Great Hall, the action continued as an actor depicting the film’s lead witch finder Matthew Hopkins entered the room. Giving a speech equal parts ominous and humorous on his hunt for witches, several audience members were treated to a close up examination in some on-the-fly audience participation. A supporting cast of actors from Newcastle Castle’s team played guards, townspeople and accused witches, showing true willingness for their part in the event.

Afterwards, the film was screened to begin the main event. Witchfinder General stars Vincent Price as Matthew Hopkins, portraying his notorious work hunting and persecuting accused witches in 17th Century England. Directed in 1968 by Matthew Reeves, the film has become a cult classic renowned for its excessive violence and artistic influence.

A precursor to The Wicker Man, Witchfinder General’s depictions of mob justice, torture and horror themes will please any film buff. With nods to Hitchcock in its use of voyeuristic sequences and dynamic use of camera, the film’s innovative production values excuse some stunted acting.

David Silk, Learning Officer at Newcastle Castle, gave a guided tour of the castle’s basement in the interim between the film and panel discussion. As we stood within the keep’s oppressive stone walls, we were told how suspected witches were kept within the makeshift jail during past witch trials.

Reconvening in the Great Hall, a panel discussion on Witchfinder General and the history surrounding it was led by Screenage Kicks founder Kris Atkinson. The speakers included Stephen Laws (North East based horror novelist), Jo Bath (historian and author of Dancing with the Devil: And Other True Tales of Northern Witchcraft), and familiar face Mark Iveson (author of Cursed Horror Stars).

Discussion was engaging and crossed between film facts and historical accuracy. Standout talking points were how witches were not burned in England contrary to the film’s burning scene, Vincent Price and Matthew Reeves’ rocky working relationship resulting in Price’s cold performance, and documented cases of witchcraft trials in England including fraudulent claims of supernatural powers.

Without a doubt, Newcastle Castle and Screenage Kicks should be proud with the success garnered from Witchfinder General, with the castle’s Great Hall packed to capacity. Balancing macabre entertainment with stimulating historical facts, the night brought history and cinema to life in chillingly good fashion.