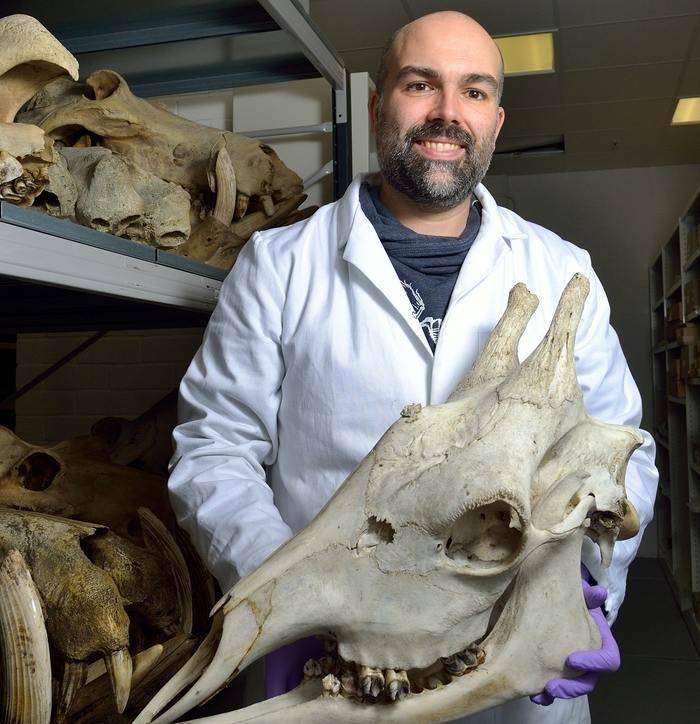 A brand new family-friendly exhibition is to shine a light on animal bones when it opens at Newcastle University’s Great North Museum: Hancock on Saturday 4 February.

Bones: Skeleton Secrets of the Animal World will see visitors embark on a journey through land, air and ocean to uncover the key roles that bones play in animal movement, survival and evolution.

The exhibition draws on the Natural History Society of Northumbria’s (NHSN) vast osteology collection and has been developed entirely by the Great North Museum team. It is the second original natural history exhibition at the Museum since it re-opened in 2009, following Spineless in 2015.

Complete skeletons, individual bones, baleen (the filter-feeder system in the mouths of baleen whales), teeth, horns and more from over 100 different animals will be shown in the exhibition, alongside important fossils and preserved specimens.

“This exhibition will be like a giant X-Ray of the animal kingdom and I can’t wait for our younger audience to come and explore these bony beasts with us. We want everyone to see animals in a new light and to leave the museum hungry to learn more about how they live, move and survive.”

It is hoped that the sheer range of material on display – from enormous rhino skulls and moose antlers to tiny frog, bat and salamander skeletons – will fill visitors with a sense of wonder at the diversity of the natural world and also demystify some of its secrets.

“Every visitor to the Great North Museum: Hancock probably knows the famous replica T. rex skeleton, but this new exhibition, specially prepared by the Museum’s own excellent curatorial team, shines a light on fascinating real bones from a huge variety of animals.”

“I’m excited to be able to put these important specimens on display. Many of the bones have never been seen by the public before, so the exhibition offers a unique glimpse into our amazing collection.”

Some of the highlight objects in the exhibition include a 3-metre long piece of baleen, a narwhal skull complete with tusk and the skull of a Gaboon viper, the world’s largest species of venomous snake.

Other objects have their own fascinating histories, having been amassed over the centuries by the NHSN. Visitors will see: bones from the now-extinct dodo, collected from a swamp in Mauritius; antelope horns collected in the Congo; and the skeleton of an Andean condor which came to the Museum on a steamer from Chile over 100 years ago.

Famously, a live condor was kept at the Museum from 1886 and curator E. Leonard Gill became fascinated with it. When the bird died in 1911, it was mounted and is still on display in the Living Planet gallery. It is thought that the condor skeleton in the exhibition is from a bird brought to Newcastle as a companion for Gill’s pet.

The exhibition will be divided into three main zones on the themes of Change, Movement and Survival. The Change zone explores the reasons why some bones become fossils when others crumble away, whilst also examining what bones can tell us about how animals looked and where they lived in the past.

The Movement zone explains why bones are the key to understanding how animals move across land, sea and sky, whilst the Survival zone investigates why skeletons, teeth, tusks, horns and antlers make all the difference when it comes to staying alive.

As in previous years, the Museum will use its major temporary exhibition to bring multidisciplinary research by Newcastle University experts to the public’s attention.

Dr Pauline Addis from the Faculty of Medical Sciences has contributed to a film that will play in the exhibit, also providing its voiceover. A specialist in equine biomechanics and a keen rider, Dr Addis will share her knowledge on how horse skeletons influence the animal’s movement.

Musculoskeletal researchers from the University will bolster a supporting programme of talks and events and the exhibition will also boast its own artist-in-residence. Fine Art PhD researcher Olivia Turner has been commissioned to respond to the show and her creation will be open for all to see as it takes shape.

Bones: Skeleton Secrets of the Animal World opens to the public at 10am on Saturday 4 February and runs to Sunday 14 May 2017. Donations are welcome. Gateshead-based puppeteers 4M will give three walkabout performances using giant skeleton puppets on opening day, at 11am, 1.30pm and 2.30pm.