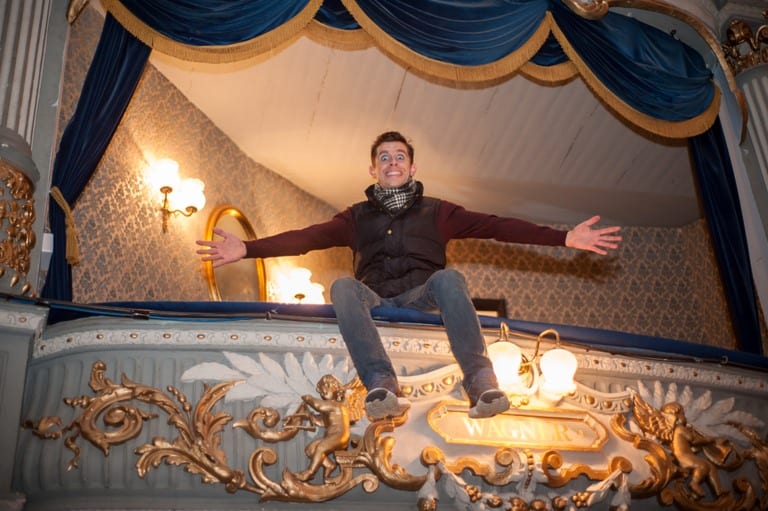 COMEDIAN and panto star Danny Adams has announced he will host ‘Smile For A Night Variety Show’ for a second time – revealing 2015’s charity show was the highlight of his career so far. Danny, who has just starred in almost 100 performances of Dick Whittington at The Theatre Royal over three months, is patron of Smile For Life Children’s Charity who organise the show.

He says being part of the fundraiser was more rewarding than he ever imaged and can’t wait to do it again. The quick-witted slapstick star said: “The variety show was my proudest moment, not just with the charity so far, it is one of the biggest career highlights I have ever had.

“Smile For Life is a big part of my life now, I have been patron for two years and it is a perfect match for what I do. I have been approached by a few charities but the right one had never come along. I wanted to help children, we are family entertainment and are about kids, children can relate to us and what we do. They feel like they know us.”

Despite its infancy, Smile For A Night has already proven to be the best fundraiser for the charity to date – raising over £8,000 in profit to go towards helping more disabled and disadvantaged children in the region.The variety show saw a whole host of established and non-professional acts take to the stage at The Tyne Theatre and Opera House – and it was such a success the next one is already booked for Sunday October 2nd.

About 800 people attended the first Smile For A Night and now Danny, and organisers at Smile For Life Charity, hope to make this year’s even bigger and better.Danny has only just finished (Sun 17th) his 11th annual sell-out panto run at The Theatre Royal, but says there’ll be no rest to ensure that Smile For A Night is just as successful.

He added: “I won’t have a break now. I’ll be working throughout the year thinking about our sketches and fresh material for the variety show so that the audience has the best time. “It is hard work, I have regular meetings with the Smile For Life team and it is very difficult to put together a variety show in a day.”

“Usually there’d be weeks of rehearsals for a show this size, but all of the acts only come together hours before the curtain goes down.“Of course the main objective is to raise as much money as possible for the charity, but showbiz is my life so the show is just as important – it has to be a very high standard.”

“Last year was a huge success and we could never of dreamed of how much we raised.”

Most of the performers for Smile For A Night are already confirmed, with big names including BBC New Comedy Award 2014 winner Lee Ridley, known as The Lost Voice Guy, who will be using his voice synthesiser to entertain the crowd. Lee has cerebral palsy but manages to communicate through his iPad and tours the UK with his stand-up act. Britain’s Got Talent 2014 star Nick Celino will also be returning to the stage after proving to be a hit when he sang his debut single Drowned at the variety show last year.

Other Geordie crowd pleasers taking part are the fantastic show dancers from Marron Theatre Arts Company, who regularly perform with Danny and Clive, and St Aloysius School choir, with three more acts yet to be confirmed.

Paula Gascoigne, Chief Executive of Smile For Life Children’s Charity, said: “Last year was a huge success and we could never of dreamed of how much we raised. “We know this year is going to be even bigger and better and we can’t wait for people to enjoy it. It feels fantastic to see hundreds of people enjoying something that we have created – from the audience to the volunteers.“The young people we support also had a unique experience working back stage at the theatre, acting as runners and extra support.”

She added: “We are so grateful to Danny and Clive and all of the performers signed up to take part, they make the show the success that it is and we couldn’t do it without them.”

The charity, which was founded in 2007 and is based in Gosforth, was chosen as The Blaydon Race official charity for 2015 and the Gung-Ho! charity partner in September 2015.

TICKETS
Tickets are now on sale at £10 for adults, £7.50 for concessions. Family tickets are £30 and groups of nine get a tenth free when bought together. Call the Tyne Theatre and Opera House Booking Line on 0844 2491 000 or go to: www.tynetheatreandoperahouse.uk

Read More »
December 15, 2021
PrevHave you read?10 Cosmopolitan Newcastle Eats
Next read...It’s A Marathon, Not A Sprint!Next