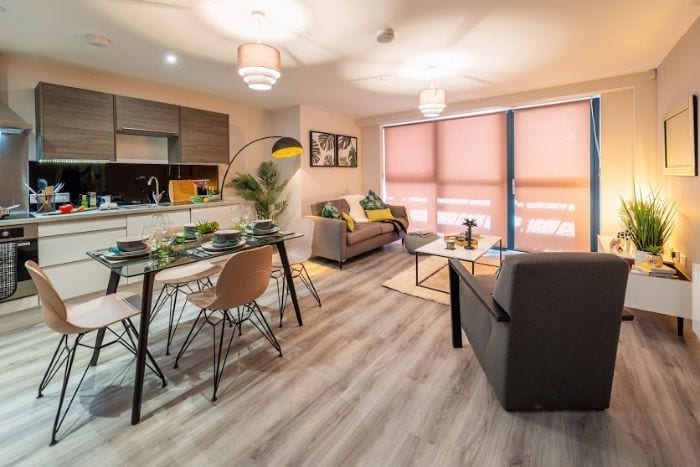 The latest development in the area known as the Stephenson Quarter, the apartments opened with a luxury launch party, suggestive of the market the accommodation is intended for.

The Forge was incredibly easy on the eyes, the polished floor tiles of the foyer a far cry from the charcoaled, smoky surroundings of a furnace that had once occupied the same space.

The Forge’s uniqueness lies in ‘superenting’, a phrase emblazoned across the screens of the communal area.

The phrase refers to the flats only being available to rent, the first of this kind in the city.

The Forge is a part of a larger PRS (private rented sector) project called Forth Banks, with a further two tower blocks currently under construction, and a total of 280 apartments planned between the three towers.

The project demonstrates Newcastle City Council’s commitment to the private rented sector and the rise of rented accommodation in cities.

The long-term commitment involved in buying a property isn’t necessarily  appealing to inner city residents; instead flexibility and the often-central location of rented accommodation is the order of the day.

Transforming a 50,000 sqft brownfield site located near the picturesque Quayside, the apartments will offer a stunning view as many will feature floor-to-ceiling windows.

The first show flat represented the lower end of the market, but was spacious, with a bedroom, bathroom, kitchen and living space, complete with a dining table and chairs.

Fully furnished, it was hard not to fantasise about coming home from a day’s work in the city, running yourself a bath (yes, a bath!) and drinking a glass of wine as the city lights twinkled in the window.

The second show flat was a two-bedroom and even more spacious.

Once again, it was decorated throughout to give guests an idea of the potential of the space, and although flats are traditionally unfurnished, the white walls a canvas upon which to express yourself, The Forge offers to furnish the apartment for you for an additional cost.

As well as the opulence and central location of The Forge, behind Central Station, its ‘security by design’ was highlighted by Heiko Figge, Head of Hospitality, Leisure and Operation at Moorfield Group, in his speech at the opening.

With 24-hour security and an onsite resident services team on hand to lend assistance, residents can sleep soundly in their beds, with their furry friends keeping their feet warm as The Forge is also pet-friendly.

The Forge reflects a trend in luxury accommodation as apartment blocks like Vita Student pop up near to St James’ Park and Central Station.

However, questions have been raised regarding its affordability. The Forge is a part of the project to regenerate the Stephenson Quarter, and as accommodation springs up on what seems like every street corner in Newcastle, it is debatable whether the amount exceeds the need.

With the median salary for a full-time job of £26,095 a year in the North East, according to the Annual Survey Hours and Earnings by the Office for National Statistics, it seems unlikely that many young professionals, The Forge’s target market, will be able to afford it.

Like much of the high-end accommodation in Newcastle, the responsibility will fall to out-of-towners who can afford to live there.

The Forge currently has several international students residing in apartments, and the opening was attended by several corporate clients, considering it for accommodation for relocating staff.

According to a council representative, The Forge ‘fits with Newcastle’s journey’, one to develop the city centre into an attractive and enticing option for investment.

Hopefully in attracting out-of-town customers, more money will be brought into a city with untapped potential but lacking in funding.

This can then be used in a top-down investment structure that can stretch further than the city centre, so that everyone in Newcastle can ‘Live Life Extraordinary’.

The Forge’s main contractor is the Marcus Worthington Group, who are working with Manchester-based Panacea Property Development and Allsop, who will let and manage the apartments.

Read More »
December 15, 2021
PrevHave you read?New Pan-Asian restaurant opens on Grey Street
Next read...Carols, seasonal animals and street entertainment across the city centre in the week before ChristmasNext