Giordano’s Andrea Chénier (Sat 5 March ’16) is presented by Opera North for the first time. Taking the life of the French poet André Chénier as its inspiration, the opera explores love and the individual at the time of the French Revolution before charting the rapid descent of hope and optimism into the Terror. Combining a dramatic storyline with compelling music, this new production looks set to become an unforgettable addition to the Company’s repertoire. 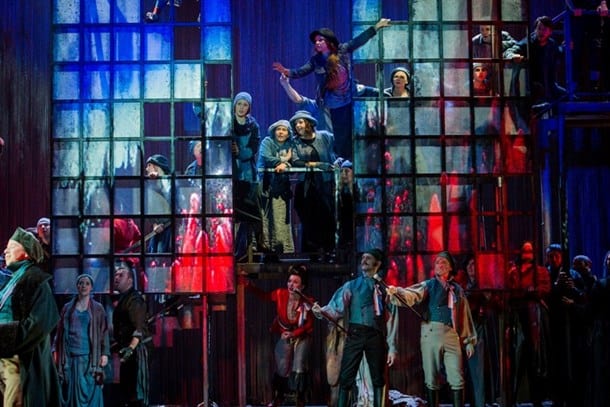 Also written at the time of the French Revolution, but with a very different focus, is Mozart’s Così fan tutte (Wed 2 and Fri 4 March ‘16). The production captivated audiences at the Theatre Royal back in 2009 and recently wowed at the Glimmerglass Opera Festival in New York. It is once again set to intrigue people with its thoughtful exploration of fidelity, deception, human motivation and the dangers of desire.

It all begins innocently enough when Don Alfonso comes up with a wager: that the fiancées of two young men are far more likely to succumb to another’s amorous advances than they might choose to believe. The ensuing, often disconcerting, consequences are accompanied by some of the most beautiful music Mozart ever wrote.

A vibrant young cast includes Dublin-born soprano Máire Flavin, who represented Ireland at the 2011 BBC Cardiff Singer of the World, making her Opera North debut as Fiordiligi. A more light-hearted approach to the twists and turns of love is found in a sun drenched 1950s-style production of Donizetti’s comic opera L’elisir d’amore (Thur 3 March ‘16).

Having enjoyed critical acclaim at Spain’s Ópera de Oviedo, it returns to England to charm audiences in the North with its playful tale of the ineffectual but good-hearted Nemorino and his quest to win the hand of the very self-assured Adina. Can Dr Dulcamara’s ‘love potion’ really solve all his problems?

Complete with hot-air balloon and Vespas, this stylish production is a perfect fit for Donizetti’s irrepressibly fresh comedy. Funny and moving, the opera includes one of the best-loved of all tenor arias in Nemorino’s ‘Una furtiva lagrima’ (A furtive tear).

TICKETS
Tickets from £18.50 (Great offers available for under 18s and school groups). Tickets can be purchased online at: www.theatreroyal.co.uk or from the Theatre Royal Box Office on 08448 11 21 21 (Calls cost 7ppm plus your phone company’s access charge)