Stu and Kelly – The interview 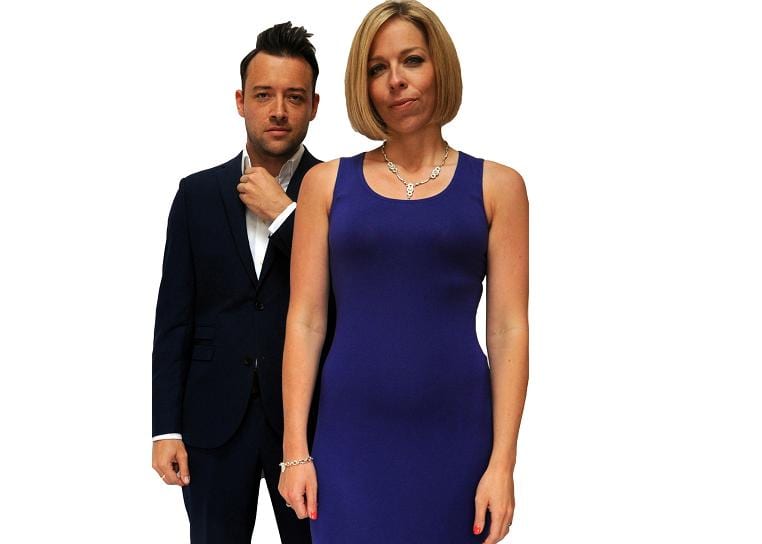 I’m always a little apprehensive about meeting people who are in the public eye in case the encounter is somewhat anticlimactic. But, when I meet Stu Elmore and Kelly Hinch from Metro Radio’s Saturday Morning show, they certainly didn’t disappoint! Kelly is a warm and attractive lady who simply oozes cool and sophistication. Stu is an uber friendly, funny ‘Lad’s Lad.’ The kind of guy you could go to the pub with and have a laugh. Stu and Kelly’s genuine but different characters certainly shine through when they’re on air. This creates a kind of Ying and Yang partnership that really works well. It also helps that they’re really good pals on and off air.

“I once scared off Olly Murs with some outrageous flirting”

Stu and Kelly’s successful collaboration on their Saturday morning show has rapidly established a large and ever-increasing listener base making them a major asset in Metro Radio’s campaign for airwave dominance. This was reinforced earlier in the year when the two adopted Geordies were nominated for a Presenter of the Year award at the prestigious Arqiva Commercial Radio Awards. The dynamic duo occasionally provides cover for the popular Steve and Karen Breakfast Show, like a Super Sub in a football match who comes on at the last minute and scores!

What impressed me more than anything was; although Stu and Kelly are not originally from the North East, they have quickly embraced the Geordie ethos which is clearly reflected by their warmth, humour and overall persona. They have both fallen in love with the North East and have subsequently laid down roots here. Fortunately for us, they’re not going anywhere.

Stu and Kelly kindly gave us the opportunity to visit them in the studio and ask them some informal yet informative questions:

What do you love most about Newcastle and why?

Kelly: “I would have to say that it’s the people that I love most about Newcastle”. “They have big hearts and don’t take themselves too seriously”.
Stu: “I agree with Kelly, it’s the people that make this place special”. “I’m also a big fan of the weather up here”. (Hmmm)

What is the most embarrassing thing you have done whilst on air?

Stu: “It’s funny you should ask that”. “We had Callabro in the studio yesterday and I accidently fell off my chair and not in a subtle way either, I fell in a spectacular, Hollywood action movie type manner”.
Kelly: “I once scared off Olly Murs with some outrageous flirting”. “I also had James Arthur ask if I could make my next baby with him”.

Who is the best celebrity you have interviewed and why?

Kelly: “My favourite celebrity interview was with Tony Mortimer; he was such a sweet guy and allowed us to chat about his East 17 days rather than his new solo album which he was here to plug”.
Stu: “I agree with Kelly, Tony was brilliant and agreed to do an East 17 duet with me live on air”.

Do you both ‘get on’ with each other most of the time?

Stu: “Yes we do, however, after we’ve spent a good few hours together we’ve both had enough and start to wind each other up”.
Kelly: “I agree”. “Stu is also a perfectionist and likes things to be done a certain way and if it’s not right he will spontaneously axe the idea, sometimes just prior to us going on air”.

Who’s your favourite member of Geordie Shore and why?

Stu: “I would have to say I like Jay because anyone who can spend that amount of time on their eyebrows gets my vote”.
Kelly: “My favourite is Gaz for obvious reasons”.

Where is your favourite place to eat in Newcastle?

Kelly: “I like Pani’s Café on High Bridge Street as they serve really tasty and authentic Italian food”.
Stu: “I like the Fat Hippo Underground on Shakespeare Street, I’m a huge burger fan and their burgers are amazing”.

In a Ron Burgundy style Anchorman fight who would win between fellow presenters Steve and Karen and yourselves?

Stu: “Steve would be an absolute pushover as he would just talk his way out of it”.
Kelly: “Karen would beat us all up with just her stare”!

We end there; however, I could have literally talked all day with this charming and charismatic pair. I’m sure that my new found bromance with Stu and
little crush on Kelly will encourage many more future interviews with I Love Newcastle’s new Bff’s on the radio.

Read More »
December 15, 2021
PrevHave you read?National Beauty Show Newcastle 2014 to be held at St James’ Park
Next read...Coast to Coast – Not just a bar and restaurant, it’s an all day eventNext