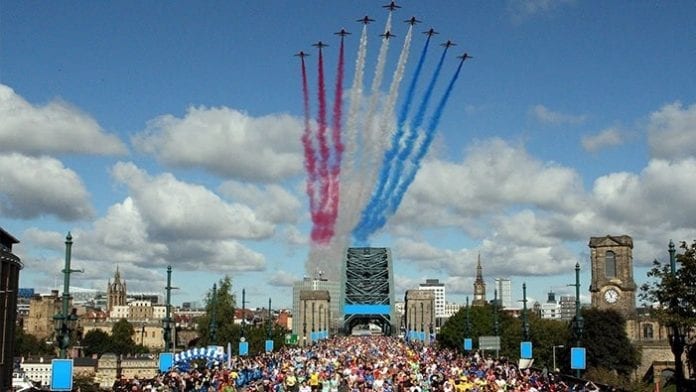 This weekend saw the eyes of the world focus on our great city.  The Great North Run returned to the North East and Legendary runner and winner of the previous four events Sir Mo Farah took his place amongst the thousands of participants.

Looking for his fifth win in five years – something which would set a new record he set off at a blistering pace and looked like he meant business.

As Sir Mo led from the front the thousands of other participants waited patiently for their turn to set off – it takes a good twenty minutes to half an hour to get everyone going such is the turn out to one of the UK’s most popular races.

Approximately 43,000 people from all over the UK and beyond turned out to take on the 13.1 mile half marathon with most doing so to raise funds for many well deserving charities.

For some people just turning up and attempting the race wasn’t enough though – there was an array of weird and wonderful fancy dress costumes on show – my pick of the  bunch was the bloke dressed as a Rubik’s cube.  The event as always brought out the best in everyone taking part – and those supporting with several instances of the general public being on hand to lend assistance to some runners.

Lisa Rutherford and Caroline Curry, the mothers of Chloe Rutherford and Liam Curry who were killed in the Manchester Arena bomb attack in May 2017, said their charity efforts would “help inspire local youths to fulfil their dreams”.

“They would have a bit of a giggle knowing their mams were doing the Great North Run,” said Lisa, who lives in South Shields.

Northumbria Police also tweeted a message of thanks to people who “formed a human chain” around a runner who collapsed.

There were of course many celebrity faces who turned up to take on the challenge including Ross Noble, Chelsea Halfpenny and previous I’m a Celebrity….Get me Out of Here winner Vicky Pattison who said she was proud to be taking part in her home city.

“The last six weeks I’ve definitely got my head down, I’m feeling motivated.

“I don’t think Mo Farah needs to worry though. I’m no distance runner.”

Well Pattison was right Mo didn’t have anything to fear from anyone as it turned out as both himself and New Zealand’s Jake Robertson gave a repeat of last years first and second placing’s.

Farah crossed the line in 59 minutes 26 seconds to secure his record fifth win – just missing out on a personal best, with Robertson finishing 31 seconds later.

Speaking about his record efforts Farah was disappointed to not have run a person best but was pleased with the victory.

“Training’s different now as I’m not in the track season, I’ve been doing a lot more long runs and in terms of endurance I’m definitely fitter”.

“Just coming into that headwind it was so tough, I wasn’t going smooth, I was going up and down. I honestly thought I could beat my personal best today, but those last two miles really hurt.”

Although we are all very impressed with Sir Mo’s efforts it was his wife Tania who managed to beat her personal best running the race in one hour and forty-five minutes.  Speaking after the race Tania said that her kids get more excited to watch their mum race than their dad.

“My kids have had a big part to play in my running.” she said.

“Mo influences me a lot, I got a taste of it two years ago and my kids get more excited seeing me run than their dad.

“I wanted to prove that Mo isn’t the only one that can run and wanted to show that Mums can do this and it’s great to see so many Mums are getting better times than me.

“That’s why I did this race, the crowd really carry you – it’s the best race for atmosphere, there’s no other crowd like it.”

'My kids get more excited seeing me run than their dad.'

As with every year the entire weekend was a great success and had everything, the red arrows made their annual appearance with a spectacular fly over, the fancy dress game was strong – and you have to feel for the person who lost a trainer near the start line.

Read More »
December 15, 2021
PrevHave you read?Is vandalism the only issue confronting the Mobike scheme or is there an underlying problem?
Next read...It’s World Suicide Prevention Day: How to enhance your wellbeing in NewcastleNext