The Show ‘Must Go On’ For Famous Geordie Magician 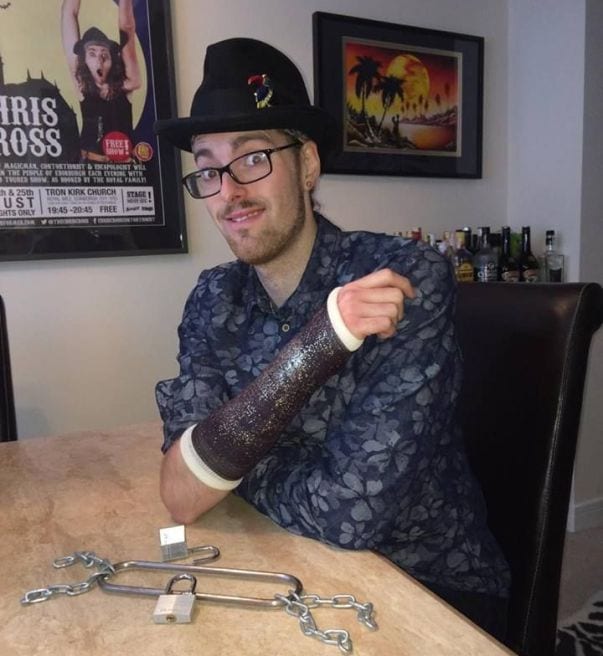 A GEORDIE magician who has broken his hand while practising his latest routine for a show at The Tyne Theatre has had to re-learn all of his tricks in just 24 hours.

Chris Cross, who has performed for Boy George, HRH The Prince of Wales and Mike Tyson among others, is starring in his first ever variety show at The Tyne Theatre in September and hit his hand on a marble table when practising one of his new escapology tricks.

The world-renowned performer, who has been doing magic tricks for 16 years, ended up with his right hand in plaster and had only 24 hours to learn how to shuffle cards left-handed and change his whole routines for his forthcoming gigs this week.

”Cross is FASTER than ME – his tricks are TOTALLY AMAZING!!” – SUGAR RAY LEONARD, FORMER WBC WELTERWEIGHT CHAMPION OF THE WORLD

He said: “Breaking my hand is a bit like a footballer breaking his right striking foot. I’m having to learn to be a lefty for the time being which has meant I’ve had to learn some totally different tricks – and quickly! “My hand is half of my livelihood. There is a chance it will not recover and I may have to re-think my whole career if it doesn’t. I am just praying that it heals properly but there is a risk that it won’t.

“I will still appear at and perform at my booked gigs but it’ll be different tricks that I can perform one handed for now until the cast comes off in a month. I can’t do a lot of my set that requires two hands so have had to re-think a lot, it’s like starting all over again – but the show must go on.”

”One of the WEIRDEST things I’VE seen in a LONG time!” – ALICE COOPER

In the meantime Chris, who is sporting a black and gold sparky cast in tribute to the late David Bowie, is trying to keep his spirits up and says the injury may affect his magic, but it won’t hinder his unique style.The 26-year-old from the West End added: “I got the glittery cast as a tribute to Bowie, a fashion icon. I love anything a bit shiny and decadent, at least my cast will match my costumes and the black and gold suits I perform in too.

“I have seen people with different casts on before and thought ‘that’s mint!’ so I asked the staff at the hospital if I could have a black and gold one, they thought it was quite cool.”

Among his performances lined up for this year are a magic show with Paul Daniels and Debbie McGee at Chris’s very own Quayside Cabaret Club, above Prima Ristorante on May 19th, and ‘The Greatest Show on the Tyne’ at The Tyne Theatre and Opera House on September 2nd.