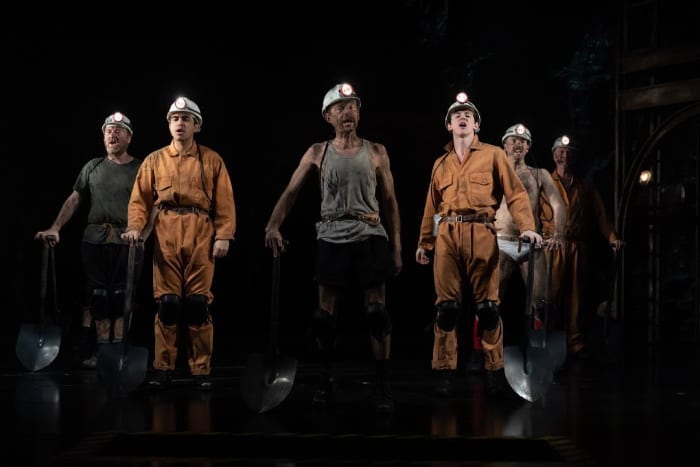 Since its first run in 2014 at London’s Hampstead Theatre, writer Beth Steel’s play Wonderland has been showered with praise from the likes of The Guardian and The Stage.

Now the Nottinghamshire-set mining drama makes its North East debut at Newcastle’s Northern Stage with director Adam Penford at the helm. How will Wonderland fare with audiences in a region with just as rich a mining history as its setting? We were there on its opening night to find out.

The year is 1983. As a cloud of pit smoke clears, we meet teenagers Malcolm (John Booker) and Jimmy (Joshua Glenister) – two new recruits at Welbeck Colliery, greener than grass, with no idea what’s in store for them down the pit.

Luckily, coarse but kind pit deputy Colonel (William Travis) and his fellow miners – old hand Bobbo (Karl Haynes) and jack-the-lads Spud (Nicholas Shaw) and Fanny (Jack Quarton) – take the pair under their wing and so begins their initiation into life down the pit in all its bawdiness, brotherhood and danger.

But no sooner are the lads settling in than a wave of pit closures is announced and the national strike is called. Before long the group’s once strong camaraderie starts to crack and factions form as the picketers picket and the so-called scabs continue to work.

As the situation grows increasingly desperate, scenes from Welbeck are punctuated with scenes featuring some of the real-life key players on the other side of the fence. There’s the arrogant American chairman of the National Coal Board Ian McGregor (Robin Bowerman), conniving Conservative transport secretary Nicholas Ridley (Geff Francis) and devious dandy David Hart (Giles Taylor) who went around the country convincing miners to return to work.

To say they’re an unlikeable bunch is putting it mildly but if there’s a slightly sympathetic character among them its energy secretary Peter Walker (Paul Kemp) who at least shows he’s somewhat conflicted about the others’ hard-line approach as they plot and scheme to break the miners’ union and the strike.

Switching between these two sides gives us a panoramic view of the events leading up to and during the strike but our sympathy lies firmly with the miners. Seeing the contempt from the government, police and media directed at these men – proud, salt of the earth types who followed in their fathers’ and grandfathers’ footsteps down the mines –is heart-wrenching to say the least.

The darkly comic Wonderland isn’t all doom and gloom though. The banter between the pitmen is foul-mouthed and very funny and even the likes of MacGregor and Hart are amusing (if infuriating) in how completely out of touch they are. There’s even some singing too – miners’ work songs, naturally – that help keep things lively.

It’s still a play with a message, however, and one that’s as important back then as it is today. Though it’s been over 30 years since the miners’ strike, Wonderland’s focus on workers’ rights is as relevant as ever in the face of austerity pay cuts, zero-hour contracts and the like.

As a region that felt the full effects of pit closures during the 1980s and currently faces similar uncertainty, Wonderland is an important and powerful play that’s sure to resonate with audiences in the North East both young and old.

Wonderland runs at Northern Stage until Saturday 9 March. Tickets are priced from £10.