A three-year-old girl has inspired councillors and residents to get behind a huge clean-up operation on the streets of North Shields. 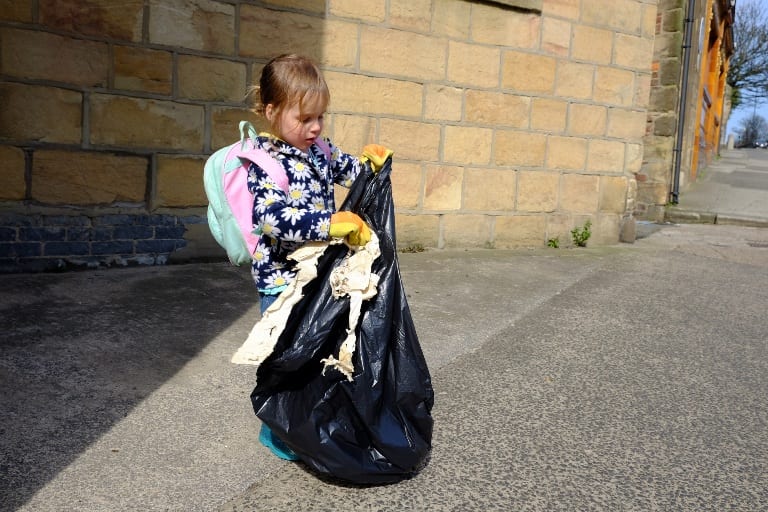 Matilda Rusby, of Tynemouth Road, pointed out litter and dog mess to her parents Frankie and Jake whenever they were out walking.

The environmentally conscious pre-schooler would often point to rubbish and say: “That shouldn’t be there should it? That’s naughty, it should be in the bin”. So in the end Frankie told Matilda: “Lets do something about it!”.

The family got gloves and bin bags and went out onto their street picking up rubbish and didn’t stop until the whole stretch of Tynemouth Road was clear.

Frankie then Tweeted photos to her local ward councillor Karen Bolger of Matilda tidying the street and captioned them ‘why should by three-year-old have to do this? If she knows better why don’t others? Please help us fight for cleaner streets for our children’, spurring on a joint clean-up mission.

Cllr Bolger set about putting up signs saying ‘clean it up’ and extra bins down the stretch of Tynemouth Road as well as a painted sign on the path. She has also organised a ‘Big Spring Clean’ set to take place on Saturday May 7th where residents will be geared up to get behind this little girl to put the pride back into their streets.

Frankie, 32, said: “As parents we teach our children what is right and wrong, and Matilda really takes this on board, particularly with litter. She was so affected by the rubbish on our streets, telling me that it was wrong and naughty I just couldn’t leave it. It’s a stark reminder of how bad things are when it takes a three-year-old to tell adults that this is wrong.

“I want to show her that we can make a difference if we believe in something, and I have told her just what a difference she has already made to helping to clean up our neighbourhood.

“I am proud that she has taken such an interest in this issue but when I saw her with gloves on picking up other people’s litter and putting it into her black bag I just thought ‘this isn’t right, my daughter should be playing on this street not cleaning it’ and so it went from there.”

Frankie, PR Director at Rusby Media, added: “I really hope that this is the beginning of a cleaner neighbourhood, we are seconds from Northumberland Park and minutes from Tynemouth beach so the road attracts a lot of footfall, but we shouldn’t have to suffer for that. I want to be proud of where we live when we step outside our front door.”

The family are now regularly seen outside picking up rubbish, inspired by their daughter to keep their streets clean.

Matilda, who attends James Knott Nursery School, said: “You shouldn’t put rubbish or dog poo on the ground, it should be in the bin. It makes me feel really sad when I see it. I want people to clean up after themselves and make the streets nicer.”

Labour cllr for Tynemouth Karen Bolger says she hopes this can be the start of a cleaner ward. She said: “When I got the pictures of Matilda clearing up rubbish I thought it was very sweet, she saw a lot of litter and wasn’t happy it was on her streets and so has done something about it.

“We need to look forward with people of the future like Matilda and be proactive and be proud of our area, instead of just moaning about a problem. “She has the right attitude and has been taught from a very young age that littering is wrong, and now we need to get behind her. There seems to be a whole section of society that thinks it is someone else’s job to pick up rubbish.

“Since getting in contact with the Rusby family I have enlisted the help of North Tyneside Council. They checked the street bins and confirmed regular bin collection, they stencilled “pick up after your dog” on the pavement and they checked and confirmed road sweeping schedules.

“To keep the initiative going, we are taking part in a ‘Big Spring Clean’, which had been running for some years. The litter pick date is set for Saturday 7th May and leaflets and posters have been distributed in the vicinity, advertising the meeting place of McColl’s shop at 10am.

“Furthermore, the Rusby family and I will be looking into encouraging further community participation. We hope to perhaps form a group of willing volunteers to help brighten the locality with further initiatives in the future. We hope as many residents as possible will get involved.”

The Big Spring Clean is a council initiative, often used alongside an educational programme taken into local schools at Head Teachers’ request, helping and encouraging children to pick up litter and use roadside bins, keeping the Borough greener, cleaner and safer.

WHERE & WHEN
The clean-up of Tynemouth Road and surrounding areas will take place from 10am on Saturday May 7th meeting at McColl’s shop. Litter pickers will be provided.

CONTACT
For more information or to come along contact Frankie Rusby on 07766933216 or email: frankie@rusbymedia.com. To contact cllr Karen Bolger, labour ward cllr for Tynemouth, call 07583 029717 or email: karen.bolgercllr@northtyneside.gov.uk

Read More »
December 15, 2021
PrevHave you read?A Diamond For All Occasions
Next read...Jesmond Community Festival Kicks Off In StyleNext