The world’s best-selling mystery is coming to Newcastle Theatre Royal! 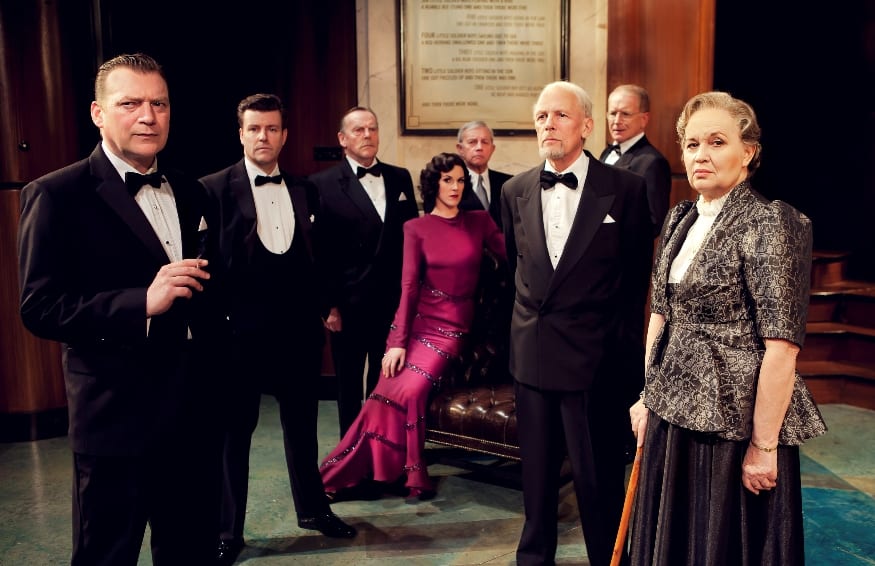 Agatha Christie’s And Then There Were None has recorded 100 million sales to date and the ‘Queen of Crime’s’ own stage adaptation of this dark and captivating tale is set to thrill audiences from 27 July – 1 Aug 2015.

A group of 10 strangers is lured to a remote island off the coast of Devon. Upon arrival they discover that their host, an eccentric millionaire, is missing. At dinner a recorded message is played accusing each of them in turn of having a guilty secret and by the end of the evening the 10 guests become nine. Stranded on the island by a torrential storm and haunted by an ancient nursery rhyme, one by one the guests begin to die. And with only the fallen believed to be innocent who amongst them is the killer?

Featuring a host of familiar faces from the world of TV and theatre, the show stars 2015 British Soap Award winner Verity Rushworth, best known for her role as Donna Windsor-Dingle in the long-running ITV soap Emmerdale. Verity won the ‘Best Scene’ award for the scene where Donna says goodbye to her daughter April. And Verity is no stranger to the stage having made her West End debut as Penny Pingleton in the musical Hairspray and later she played Maria Von Trapp in the UK tour of The Sound of Music, taking over the role from Connie Fisher.

Verity is joined by fellow Emmerdale veteran Frazer Hines, who played Joe Sugden in the soap for 22 years from the pilot episode in 1972. Many will also recognise Frazer as Dr Who’s Jamie McCrimmon, companion to the second Doctor Patrick Troughton. Frazer’s theatre experience includes starring roles in Outside Edge, Dial ‘M’ for Murder, Spider’s Web, Not Now Darling, Doctor in the House, in which he played opposite Bill Kenwright, Run for your Wife, Wait Until Dark and Far From the Madding Crowd.

Musical Theatre star Paul Nicholas first made his name in the original London production of Jesus Christ Superstar, in which he played the title role and later went on to star in Hair and Grease in the West End with Elaine Paige. Paul will also be known to many as Vince Pinner in the 80s BBC sitcom Just Good Friends.

Colin Buchanan, best known for playing D.I Pascoe for eleven years in the hit BBC television series Dalziel and Pascoe, joins the cast off the back of starring in a UK tour of another Bill Kenwright production, J.B Priestley’s Dangerous Corner.

Susan Penhaligon is probably best known for starring in the 1976 ITV drama Bouquet of Barbed Wire and for playing Judi Dench’s sister in the 1981 LWT sitcom A Fine Romance. She has also appeared on TV many times in dramas such as Upstairs Downstairs, Casualty and Touch of Frost and her extensive West End theatre credits include The Three Sisters, Of Mice and Men (Mermaid) and Dangerous Corner (Whitehall Theatre).

Mark Curry is best known to children of the Eighties as one of the Blue Peter presenters as well as hosting Get Set for Summer, The Saturday Picture Show and Screen Test. His acting credits include Alan Parker’s Bugsy Malone, London’s Burning, and West End shows The Woman in Black, Talent and he toured with Noises Off and Singin’ In The Rain.

Ben Nealon is best known for his role as 2nd Lt/Lt/Capt Jeremy Forsythe in the ITV award winning series Soldier Soldier. His previous work for Bill Kenwright includes The Signal Man (Windsor) and the Passport For Pimlico tour. His TV credits include Casualty, The Bill, EastEnders and Doctors, and film roles include the Bollywood blockbusters The Rising and the Oscar-nominated Lagaan.

As The Agatha Christie Theatre Company marks its 10th anniversary with this production of And Then There Were None, the interest and adoration for the great Dame Christie – who having sold over two billion books worldwide is outsold only by the Bible and Shakespeare – continues to grow.

This production of And Then There Were None is produced by Bill Kenwright, with Joe Harmston directing, design by Simon Scullion, lighting by Douglas Kuhrt and sound by Matt Bugg.

TICKETS
Tickets from £14.50 (pay 50p less per ticket when you book online). Tickets can be purchased from the Theatre Royal Box Office on 08448 11 21 21 or select your own seat and book online at: www.theatreroyal.co.uk

And why not tempt yourself with Afternoon Tea after the matinees on Thu 30 July and Sat 1 Aug? Served in our exclusive Olivier Suite and accompanied by one of our pianists, you can treat yourself for £14.95 per person or upgrade to Afternoon Tea with Prosecco for £20.90. Book via the Box Office or online at: www.theatreroyal.co.uk/whats-on/afternoon-tea

Read More »
December 15, 2021
PrevHave you read?Toon trio set to relive the last glory days of Magpies
Next read...New Home and baby strikes a chord with local musician and his familyNext