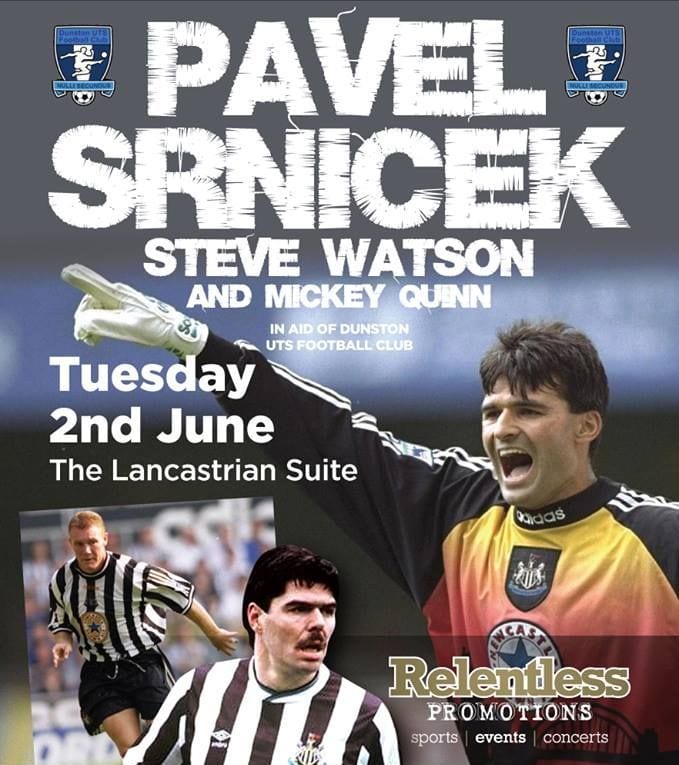 Micky Quinn, Steve Watson and Pavel Srnicek, three names synonymous with the recent history of Newcastle United, they are the connections to when football in a black and white jersey was good.

The trio will, at the Lancastrian Suite, Dunston on the night of June 2, will untie for an evening of tales about a bygone era as Relentless Promotions aim to unleash that black and white magic.

“After the season Newcastle have just had it will be nice to reflect on the happier times with all three players involved on the night having given their all for the shirt.”

Event organiser and Managing Director of Relentless Promotions, Steve Wraith, said: “After the season Newcastle have just had it will be nice to reflect on the happier times with all three players involved on the night having given their all for the shirt.”

Quinn exploded into life on Tyneside with an unforgettable four-goal blitz on his debut against Leeds United on August 19 1989 ending the season as the Football League’s leading goal scorer. He stayed at the club until 1992 when he joined Coventry City.

Watson is the local lad come good having been born in nearby North Shields and joined the clubs’ youth setup in the late eighties.

He went on to make his first team debut against Wolverhampton Wanderers on November 10 1990 becoming the youngest player in Newcastle’s long history. Including youth appearances Watson dedicated nearly a decade of his career to the club before joining Aston Villa in 1998.

As goalkeepers go Pavel Srnicek is one who will long stick in the minds of the Toon Army and his association with the club rightly earned him the terrace chant of ‘Pavel is a Geordie.’ Joining from Banik Ostrava in January 1991 Pavel went on to become a cult hero and played under four different managers – Jim Smith, Ossie Ardiles, Kevin Keegan, and, upon his return for a second spell in 2006, Glenn Roeder.

Throughout his time with the club he became the club’s longest serving foreign player, surpassing that of Chilean duo George and Ted Robledo.

On what is hoped will be a special night for Newcastle, and football fans in general, organiser Steve Wraith continued: “Quinny wore the number nine jersey with pride and scored some great goals; his debut against Leeds was unforgettable. “Watto was part of the wonderful ‘Entertainers’ team and has some great stories about life under Kevin Keegan. And last, but not least, Pavel, who we all know is a Geordie at heart and is one of the greatest keepers in our history.”

Relentless Promotions presents ‘An Evening with Pavel Srnicek, Steve Watson and Micky Quinn’ at The Lancastrian Suite, Dunston on Tuesday 2 June. Tickets are priced at £25 standard and £45 VIP from www.wraithpromotions.com or the ticket hotline 0191 2299632.