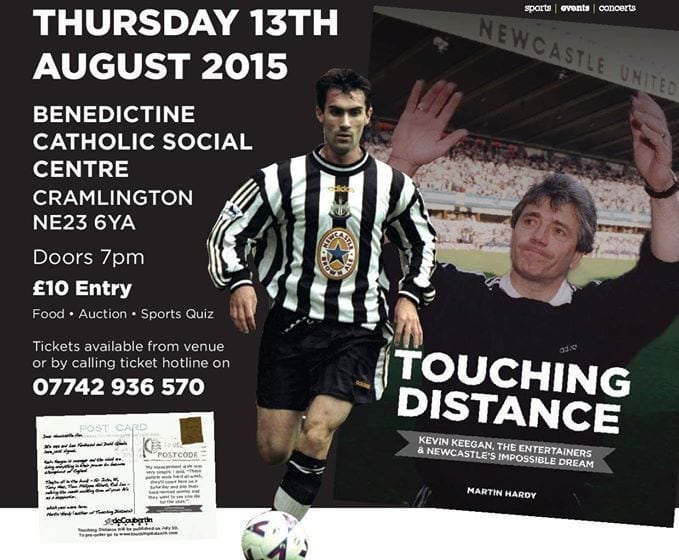 Magpies’ supporters are in for a treat at the start of the new season as Relentless Promotions bring an entertaining double-header to the masses.

During the latter stages of ‘The Entertainers’ era Northern Irish winger, Keith Gillespie, tore asunder in the black & white shirt, even making a mockery of the Barcelona defence in the famous 3-2 win at St. James’ in September 1997. And this after he joined the club as a mere make-weight in the deal which took Andy Cole to Manchester United.

It is a period during the nineties which is the topic of a new book due to be released entitled ‘Touching Distance’ as Martin Hardy tells the tale of Kevin Keegan, the Entertainers, and the impossible dream – winning the Premier League title and concludes as United closed the 1995-96 campaign against Tottenham Hotspur.

Danny Cox, CEO ahttps://www.ilovenewcastle.comt Relentless Promotions said: “It was the perfect fit to have one of Keegan’s famous entertainers side for a talk the same time as Martin did his book launch.

“We are delighted to be involved in a moment like this and, as ourselves at Relentless are big Newcastle fans anyway, we could think of nothing better. We’ve gone for two nights at two venues in order to give a better offering to the Newcastle faithful who we expect will turn out in force for their own, as they always do.”

Martin Hardy, author of ‘Touching Distance’ which is due for release at the end of July and chronicles Keegan’s halcyon era for the first time added: “I thought it was time to tell the story of Newcastle’s rise to potential champions of England in the true, dramatic context, and in the words of those who made it happen.

“I went all over England to speak with the people involved; Les Ferdinand in London, Terry McDermott in Ponteland, Sir John Hall in Newcastle, Darren Peacock in Lancaster and over to Europe to see Pavel Srnicek and Philippe Albert.

“They all brought the period to life, how special it was, how the city, the fans and the football club went on the march together. There was regret from everyone that they had not quite seen it through to win the Premiership, but the pride and the enjoyment was huge.

“That was the same for me, it was a lot of work, probably spanning around 18 months, but it was a real labour of love. The interviews were great and putting everything together was something I will never forget.

“Talking about the book early In August seemed the right time and Keith Gillespie, who had plenty of stories of his own to tell, seemed like an ideal person to share a stage with.

“Keith loved his time in the North east. He caught the mood of the place and said his time at Newcastle was the best of his career, as did most of the players to be fair. It’s also a great chance for Newcastle supporters to relive that period, discover elements they didn’t know, and remember what happens when Newcastle as a club shoot for the stars.”

The book, which will be available to purchase on both evenings costs £18.99 and is published by deCoubertin books.

TICKETS
The two evenings, in Cramlington (Thursday 13 August) and Whitley Bay (Friday 14 August) respectively and for just £10 per ticket there will be food, an auction, and sports quiz available on the night. These can be purchased from the venues, the Benedictine Catholic Social Club in Cramlington and the 42nd Street Bar in Whitley Bay, or from the ticket hotline on 07442936570.