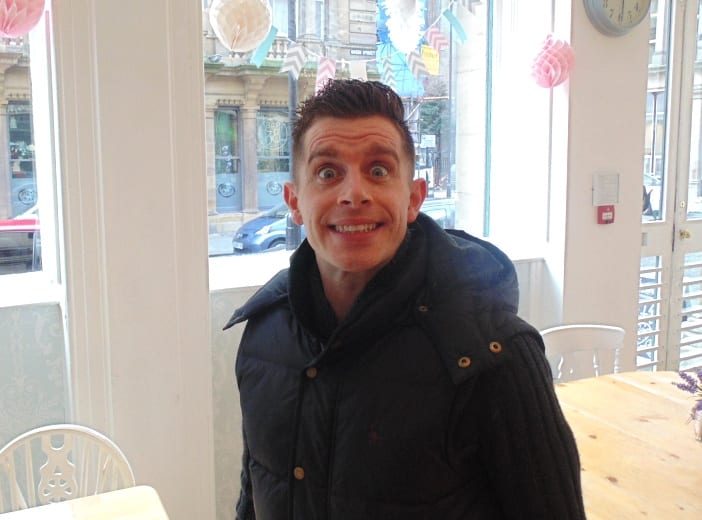 We recently had the pleasure of meeting funnyman and adopted Geordie, Danny Adams. The charismatic comedian is part of the amazing Circus Hilarious show with his dad Clive Webb. Danny is also known for his sell-out pantos at The Theatre Royal and comedy bonanzas with Cannon and Ball. His TV appearances include GMTV’s Mole in a Hole, Stars in Their Dressing Rooms and Angus Deaton’s It Shouldn’t Happen to a TV Presenter.

Danny and Clive will be hosting and starring in the ‘Smile for a Night’ Variety show which will be held on March 15th at Newcastle’s Tyne Theatre in aid of the Newcastle based Smile For Life children’s charity. The event will showcase the very best of North East performers. Danny and Clive will bring their hilarity to this fabulous event alongside escapologist extraordinaire – Chris Cross, The Frozen Sisters, Twisted Duck Theatre Company, Nick Celino from BGT 2014, The Lost Voice Guy Comedian plus many more!

Danny kindly gave us the opportunity to meet up and ask him some informal yet informative questions:

How did you become the patron of the Newcastle based Smile for life charity?

Danny: “It was last year; we were into our tenth year of performing panto in Newcastle and were approached by Paula Gascoigne (CEO – Smile for life). When Paula told me that Smile for Life was a local children’s charity I gladly agreed to be their patron as it was something that I wanted to be linked with as my job is fundamentally entertaining children.”

Circus Hilarious are performing with a host of well known artists for the ‘Smile for a night’ Variety Show on March 15, are you looking forward to it?

Danny: “Definitely; when we’ve done panto in the past two years, we’ve put on a relaxed performance for disabled and special needs young children where the house lights are left up and the effects are toned down. It’s such great and rewarding show to do”.

Do you consider yourself to be an adopted Geordie?

Danny: “The press have called me that in the past with doing panto up here for so long. My dad is originally from Sunderland and throughout his career has been drawn to the North East through theatre and television work. My fiancée, a dancer with Circus Hilarious, is from Newcastle so I guess that does make me one.”

Other than you Dad, who else is your inspiration?

Danny: “The old greats like Norman Wisdom, Tommy Cooper and Buster Keaton, These comedians are timeless. My fiancé and I were recently watching Sunday Night at The Palladium and we both thought that something was missing from the performances. So, I found a clip, on the internet of Bruce Forsyth and Norman wisdom performing live and played it to her. We were both mesmerised by their originality and sheer genius.”

You work with your dad most of the time; do you enjoy working with him?

Danny: “We have our own show called Circus Hilarious which goes on tour most of the year, and then we do cabaret and corporate gigs. Sometimes we do our own thing but mainly dad and I work together. Its lovely working with dad because we’ve worked together for so long that we almost have a sixth sense about what each others doing on stage.”

Career wise, what would be your ultimate goal?

Danny: “I would love to get on television doing what we do like the Chuckle Brothers who have been doing their show for 22 years now. I wouldn’t want go on a reality show like Big Brother, I would like to be known and recognised for what we do.”

Do you have a good fanbase?

Danny: “Yeah we have an amazing fanbase, some follow us around the country to watch our shows. Some fans are crazy; doing crazy things like throwing pies and buckets of water for a living attracts some crazy people. It’s lovely to have such a large and loyal fanbase though.”

We end there; however, we could have listened to Danny’s amazing stories all day! You can follow Danny’s Circus Hilarious on their website here>>

Smile For A Night will begin at 3pm on Sunday March 15 at The Tyne Theatre and Opera House, Newcastle.