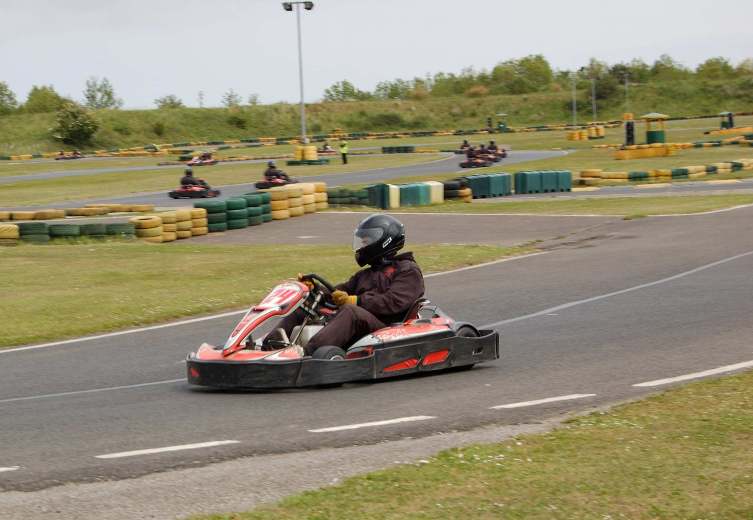 We recently visited Karting North East for a fun packed, adrenaline fuelled day which was full of thrills, spills and some very steep hills!

Situated just off the A19 at the Warden Law Motorsport Centre, the venue is easy to find and handy enough for anyone in the North East to visit; and there’s a lot more to Karting North East than just Karting…

“So…If its fun you’re after, Karting North East supplies it by the bucket load!”

The impressive centre boasts a 1.2 kilometre Karting circuit, making it one of the longest in the UK, and a 350 meter junior circuit. There’s also a purpose built, 2,500 sq metre paintball facility, which is the largest paintball arena in the UK, perfect for anyone wanting to get their ‘Rambo’ on.

There’s also a tomahawk/ archery centre and a vast off road driving course which runs the perimeter of the venue. So…If its fun you’re after, Karting North East supplies it by the bucket load!

When I arrived at the venue, on a busy Saturday morning, the first thing I noticed was how organised and uber efficient the centre was. It was very apparent that the whole venue has been meticulously organised with the safety and enjoyment of its visitors at the forefront of its plans.

I was accompanied on this by my two sons and to say we were all excited, would have been an ‘understatement!’ Our first activity of the day was archery and after a quick induction from tour friendly Marshal, we then fired arrows off like pro’s (well, sort of). Archery is definitely harder than you think but loads of fun nevertheless.

Our next activity was the much anticipated Karting. Each group’s itinerary is meticulously planned out prior to their visit which keeps waiting times down to an absolute minimum. We donned our racing coveralls, gloves and helmets before receiving our driver induction. If you’ve never done Karting before I have to say that the anticipation and excitement prior to entering your kart is almost too much!

We started and had 30mins of pedal to the metal, sheer joy. The speed of which the Karts are capable of along with the impressive layout of the track certainly brought out my competitive side; as I morphed into a Lewis Hamilton wannabe and desperately tried (and failed) to beat everyone on the track.

I became so engrossed in the race that my allotted time seemed to fly by. After the race we were then given a post race debriefing which highlighted lap times and general driving ability (or lack of it).

After a quick bacon sandwich and a drink from the snack bar we were lead to the 4X4 track. KNE’s off road driving course has been specifically designed for their fleet of ex Army Landovers pushing them to their limits. After a quick safety brief and with me at them helm, we embarked on the gruelling course loving every very steep hill and pothole we negotiated.

We had an absolute blast at Karting North East and I urge everyone to give one or indeed all of their activities a try and there’s really no surprise that the venue is a magnet for Stag parties, corporate events and families. Don’ just take our word for it, KNE has been awarded The Certificate of Excellence from TripAdvisor as they’ve maintained an overall rating of four or higher, out of a possible five, as reviewed by travellers for at least 12 months.

The informative Karting North East website constantly features promotions so it’s definitely worth a browse prior to your visit.

Read More »
December 15, 2021
PrevHave you read?NE1 Presents the Newcastle Motor Show
Next read...Fitness and Friendliness go hand in hand in the North EastNext