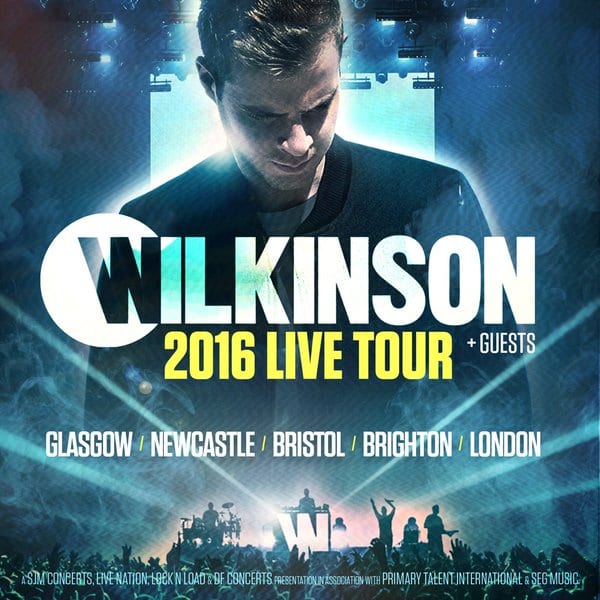 South West London Drum and Bass DJ/ producer, Wilkinson has announced the details of an incredible live tour for March/ April 2016. The five date run will see him play across Scotland and the UK, kicking things off in Glasgow at O2 ABC on March 23rd and will run through until April 8th taking in London’s O2 Shepherd’s Bush Empire.

Wilkinson, now signed to Ram Records/Virgin EMI is being touted as one of the brightest new stars in dance music. Following his club anthems ‘Tonight’, ‘Take You Higher’, ‘Need To Know’, ‘Heartbeat’, ‘Too Close’ and ‘Hit The Floor’ Wilkinson released ‘Half Light’ charting #20, Dirty Love which peaked at #10 and ‘Afterglow’ which became a top 5 hit on the UK Chart, selling 400,000 copies with 45 million YouTube views. His following single ‘Hopelessly Coping’ peaked at #23 on the UK Top 40, whilst topping the Shazam and iTunes Electronic charts.

His debut album ‘Lazers Not Included’ went to number 1 on the iTunes Dance Chart in 10 countries and his tour schedule has taken him across the globe including performances at the Radio 1 Big Weekend, Glastonbury, Wireless and his 2015 summer residency at Amnesia in Ibiza.

Having remixed and collaborated with the likes of Ed Sheeran, Chase & Status, Naughty Boy, Wretch 32, Katy B, Laura Mvula and Nero, he recently scooped ‘Best Single’, ‘Best Album’, ‘Best Video’, ‘Best Producer’ and ‘Best Live Act’ at the National Drum & Bass Awards, not to mention the VEVO Viewers Award at the MVA’s.

Wilkinson is currently putting the final finishing touches to his highly anticipated second album that is due for release next year. Bringing his live show on tour for the very first time alongside a full band and host of very special guests, expect an unmissable night.