Fresh from their US leg of the Gypsy Caravan Tour and ready to unleash their newest album “Victorious”, Wolfmother’s high octane hard rock rips up Newcastle. 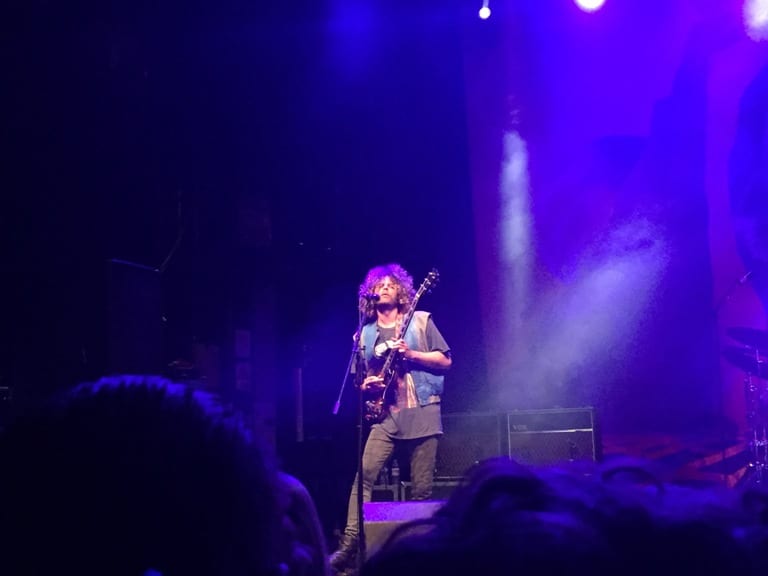 The band’s last appearance in the North East was 2010 on the Cosmic Egg Tour, so their return has been hotly anticipated. Appearing at O2 Academy Newcastle on April 10th, Wolfmother brought a scorching day with them that felt more like their home country Australia than UK springtime. After a chat with the band (see interview below), a solid queue had formed around the building eager for the night ahead.

With the venue beginning to fill, support band Electric Citizen took to the stage. A five piece heavy rock group hailing from Cincinnati, Ohio, they gave a quirky offering to warm up the crowd. Although the singer and guitarist’s styles seemed firmly classic rock, the bassist, drummer and keyboard player gave their overall sound a grungy quality.

Merging genres can be a triumph or a disaster, but for the most part Electric Citizen pulled it off. Although their showing didn’t send many tremors though the crowd, the audience was happy to listen to what was on show. Highlights of their half hour set included the maracas/bass solo break between two songs, guitarist Ross Dolan’s punchy riffs, and final song “Evil” which blended gothic organ with flowing, confident vocals.

Wolfmother took to the stage with a bang, with the powerful trio of “Victorious”, “New Moon Rising”, and “Woman” to begin. As frontman Andrew Stockdale (vocals, guitar) galloped in circles to amp up the crowd, the venue shook with frenetic energy. The bluesy influence in “New Moon Rising” cut with the anthemic choruses of “Victorious” and “Woman” created a frenzy, with the audience loudly chanting the riffs back to the band (see interview).

Since reforming as a three piece, Wolfmother’s versatility onstage burns bright. As Stockdale and Alex Carapetis (drums) take more conventional roles, the juggling act of Ian Peres (bass, keyboard, backing vocals) must be seen to be believed. Jumping between blistering organ chords and assaulting his Rickenbacker bass, Peres is the glue that holds the ambitious solos and vocals together.

Stockdale’s vocals show no signs of quitting either, with new tracks “The Simple Life” and “Gypsy Caravan” adding equal parts power and precision to Wolfmother’s existing back catalogue. “Gypsy Caravan” is a future classic, with Stockdale’s infectious guitar playing working off Peres’ organ in the solo break. Carapetis’ drumming was tight throughout, as he punished the kit and got soaking wet with the hard work.

The band also brought a nice touch of class to their set by dedicating the song “Pretty Peggy” to a couple in the crowd (“Ashleigh and her Irish companion”). The laid back guitar and bright vocal harmonies make “Peggy” a change of pace amongst the heaviness of the regular set.

Their encore and final song of the set was the iconic “Joker and the Thief”, which got the whole room jumping and several crowd surfers braving the wave. Perhaps their most recognised song next to “Woman”, the three piece harnessed a surplus of energy from their fans and turned out an amazing finale.

All in all, Wolfmother delivered a pleasing set with a good balance of new and classic material that thrilled their audience. The pack will hope for Wolfmother’s quick return, after getting their fill of meaty riffs, thunderous bass, and Zeppelin-esque vocals. With any luck, they will be visited again by Australia’s finest soon enough.

I Love Newcastle had the chance to interview Wolfmother before the show, and spoke to members Andrew Stockdale (vocals, guitar) and Ian Peres (bass, keyboard, backing vocals):

How’s the tour going so far, and how do you feel going into the festival season this year?

Andrew: Oh yeah, the tour’s going great. We just did Dublin and Manchester and (the) crowds were fantastic, bands playing really well, we’re looking forward to playing in August, should be great.

Andrew: But the festivals have kind of been backing us up for a few years now, we’ve always had some offers and they’ve always invited us back once a year or so, so it’s been..

Newcastle has a big connection with Australia with the Tyne Bridge and the Sydney Harbour Bridge, what was your experience from walking around today?

Ian: Myself and Alex, the drummer, we had a walk earlier this morning, and yeah, they had the markets along the river. Alex said “This has got a real Sydney vibe to it, like Darlinghurst or something”. You just like close your eyes you could like transport yourself there in the same way, it’s got that vibe, it’s cool.

What is your guitar or bass of choice right now, and what effects are you using?

Andrew: This has been my main guitar since I’ve started *holds up guitar*. I think it’s a Gibson SG standard. It’s not a very fancy one, I think I bought it for like 1200 bucks US at Black Market Music.

I Love Newcastle: Bit more than that.

Andrew: *laughs* So yeah, that’s my main thing. I use an AC booster, my Electro Harmonix Micro Synth, a POG, Wah Wah pedal, and I’ve got a Big Muff on there just for a bit of extra distortion.

Ian: For bass I’m using an 80s Rickenbacker, a 4001, it’s that aggressive trebly sound, its the sound.

Ian: And for keys, (I’m using) an old Korg Analog CX-3 that’s kind of been like the staple organ sound for Wolfmother, and then run that through a Deluxe Memoryman and a Black Finger to give it a bit of distortion.

In terms of the UK crowds, do you notice any big difference between them and other crowds around the world?

Andrew: Yeah, I was just thinking about that last night. It seems like (they’re a) bit more vocal, bit more engaged or something, maybe it’s like the football crowd.

Andrew: That kind of like “arrrgh”, like really get involved with the bands, it’s a very vocal crowd.

Ian: They sing the riffs, I was listening to footage yesterday of the gig hearing them go *hums “Joker and the Thief”* like a football chant, it’s cool.

What was the information for the song “Woman?”

Sorry, the inspiration
*all laugh*

I had that demo for about.. how long was it for, from 2000, about four years, and then I changed the riff, changed everything, and I just went *hums “Woman” intro*. And then I thought “maybe I’ll take that vocal thing”, and I went *sings “Woman” verse*. I just changed the melody and kept the lyrics, and then it’s become you know, that was kind of like the first Wolfmother song.

Ian: You can hear that demo though on the 10th Year Anniversary Deluxe Edition of the first
album.

I Love Newcastle: *laughs* This was the Bee Gees version.

Andrew: Yeah, it’s a good way to come up with vocal melodies for Wolfmother. Like the same with Gypsy Caravan, you go *sings “Gypsy Caravan” high pitched*. It’s like if you get into Bee Gees mode, and then when I sing it with a chest voice instead of that high pitched, kind of, whatever that’s called..

Andrew: Falsetto, head voice, or whatever it is, people go “Ah, that sounds like Led Zeppelin”, because you sing like you’re trying to get those high notes there. It’s trippy, it’s a strange way to arrive at Led Zeppelin, Black Sabbath, (but) that’s how I got there.

I Love Newcastle: Love it.

I’ve had someone ask if you can dedicate “Pretty Peggy” to “Ashleigh and her Irish
companion” – would that be acceptable?

Ian: “Ashleigh and her Irish companion”.

Andrew: I’ll hang onto that and I will remember, yeah.

I Love Newcastle: Well thank you very much.