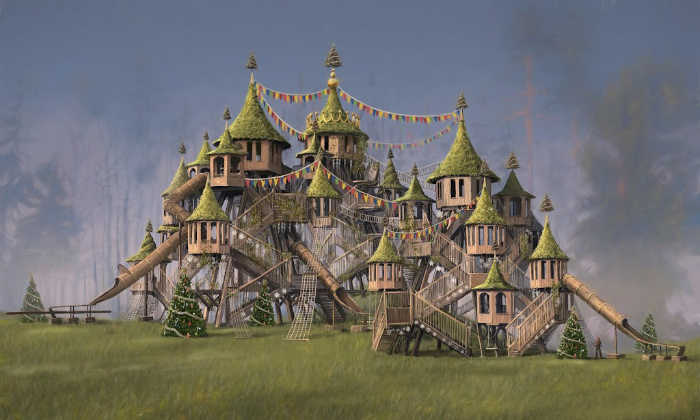 The Alnwick Garden will receive up to £5m in government funding to help bring plans for the world’s largest play structure to fruition.

The grant is part of Jane Duchess of Northumberland’s plans for the ‘Lilidorei’ project, which was approved by Northumberland County Council in July last year.

The play village is due to open to the public in 2021 in the grounds next to The Alnwick Garden.

Lilidorei (pronounced Lil-e-daw-re) is part of the Duchess of Northumberland’s ambition to bring play to a wider audience – a new visitor experience that connects the generations, but with children at its core.

Lilidorei literally means ‘The Children’s adventure with play at its heart’ and will involve building the world’s largest play structure in the heart of a play village, set near the existing garden grounds.

Construction on the £11.4m first phase of the project is due to begin in early 2020. The visitor attraction will open in 2021.

Initially Lilidorei will provide 57 full-time jobs, and an additional 40 jobs in the build phase, mainly for local craftsmen.

Lilidorei is expected to boost the economy in Alnwick and the surrounding area by £68m over 10 years, whilst creating a multi-day destination that will drive tourism, jobs and growth across the region.

Created and designed by Jane Northumberland, The Alnwick Garden is one of the UK’s leading visitor attractions, winning an array of awards including the North East Tourism Award for Best Large Visitor Attraction and the North East Charity Award for Outstanding Social Enterprise.

First opened to the public in 2001 it is run today by a charitable trust and attracts more than 350,000 visitors a year.

It has generated more than £282m for the regional economy and supported over 2800 jobs across the region.

The final level of grant funding (up to a maximum of £5m) will be determined by the amount of match funding the Trust is able to secure, but today’s announcement represents a considerable boost to the Lilidorei project.

Commenting on the news, director of The Alnwick Garden Mark Brassell said: “This is fantastic news for The Garden and the wider region. Lilidorei will draw visitors to Northumberland in the winter months, creating much needed economic activity and creating jobs.

“This will build on the social and economic impacts The Alnwick Garden has delivered over the last 18 years.”

Jane Northumberland added: “Lilidorei, a magical village of goblins, elves, sprites and fairies has been many years in the making. It will encourage children to use their imagination and to play and interact with others outdoors as an alternative to being alone in front of a screen.

“Play is important for the mind and body – it isn’t something we just ‘do’. Using the best craftsmen and film set designers Lilidorei will transport the visitor into a fantastical world of play and I’m so happy that it is going to appear in Northumberland.”

The £5m grant is part of a wider £260m investment in the English borderlands area, announced by the Chancellor as part of this year’s Spring Statement.

Minister for the Northern Powerhouse Jake Berry MP said: “This is an historic next step in building our Northern Powerhouse.  Putting The Alnwick Garden at the heart of our Borderlands Growth Deal will drive significant growth is Northumberland and the North East.

“Alnwick already has a proven track record in driving the leisure economy for the entire region and we are happy to be partners building on this success.”

Read More »
December 15, 2021
PrevHave you read?Mum donates prize to raise money in memory of the son she lost to cancer
Next read...Job market in Newcastle looking healthy with big increase in opportunitiesNext